Gabriele Aldi was born and raised in Dugenta (in the province of Benevento). He belongs to a family with a long tradition of threshers that operated on behalf of third parties in the  provinces of Benevento, Caserta, Naples and Foggia.

Gabriele started working with his father when he was still just a child. By the age of 14 he had already become a professional thresher. Since then Gabriele Aldi has continued doing this work, and may now be considered a “key informant” for a historical reconstruction of this profession.

This interview focuses on the “transhumance of threshers “. A phenomenon that had involved generations of workers for decades. They used to move from the Terra di Lavoro to Benevento and Samnium and to the area around Foggia (Puglia). This was a socio-economic phenomenon that, in a similar but more extensive way, had also involved harvest laborers for centuries. Nowadays this phenomenon still involves many workers, even though it has now evolved due to technological innovation.
Gabriele’s experience provides us with a document that photographs an important part of farm work: threshing . It illustrates the significance of the threshers’ migration, of hierarchies, professional and human relationships and even of the threshers’ food. In fact several kinds of dynamic  involve food  and are highlighted  by the narration of a “typical day”. These events are also marked by mechanical developments, such as the arrival of threshing and reaper-binder machines and finally with that of the “modern” combine harvesters. These changes are underlined in the video by some pieces of archive material.

- The Granaries of memory
- The importance of the grain
- History
- The threshers of Dugenta
- The places of the threshing
- typical day
- workers
- Food
- the preparation of bread
- breakfast
- lunch
- dinner
- workers: male and female
- Transhumance of threshers
- Work
- reaper-binder machines and combine harvesters
- the importance of the straw
- respect of the saints 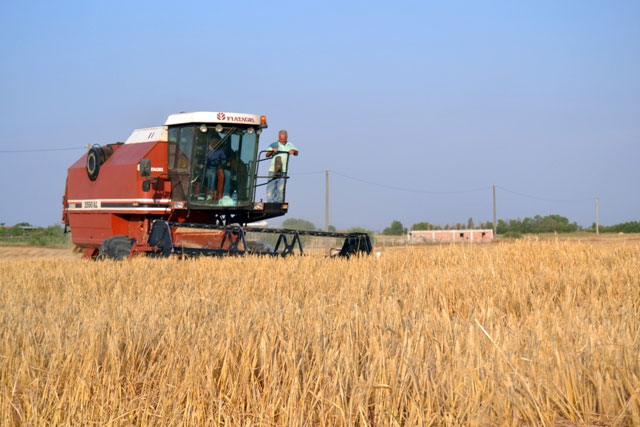